With the recent release of Culion’s full trailer, it can’t be deny that it has added excitement, with those who have seen it can’t wait to watch the film.

“Culion” has been creating buzz online from the moment filming was set to begin, to the release of teaser and ad campaign posters, up to the announcement of its inclusion to this year’s MMFF. The historical film has always managed to surprise everyone. It remains one of the most anticipated movies of this quarter, and netizens have been following updates, eager to know more.

END_OF_DOCUMENT_TOKEN_TO_BE_REPLACED 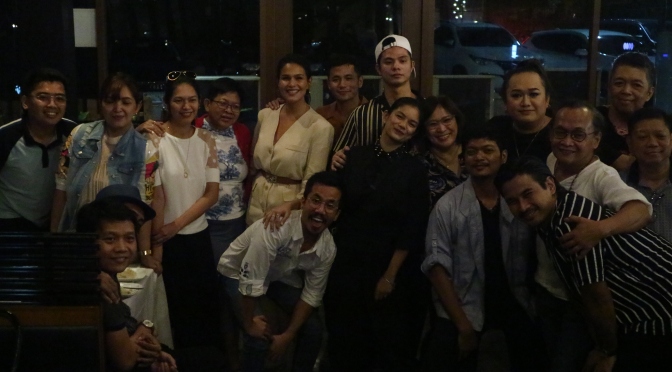 The long wait is over. The Metro Manila Film Festival Executive Committee finally announced last Wednesday, October 16 the last 4 films that would complete the MMFF Magic 8, and “Culion” secured a slot. The announcement was held at Club Filipino in Greenhills and was attended by several members of Team Culion including Producer Shandii Bacolod, Iza Calzado, Mike Liwag, Nico Locco and Executive Producer Mrs. Gilie Sing of iOptions Ventures Corp.

The weeks leading to the announcement have been nerve-wracking for Team Culion and everyone was hoping and praying that the movie would be selected, as everyone was excited for the chance to be able to tell the story in a bigger stage.

“I felt sick before the announcement and I wasn’t sleeping well. As a first timer, I didn’t know what to expect,” Executive Producer Gilie Sing shared.

She added, “After we were announced, it felt good but I was shaking inside. I was close to tears while I was explaining on stage about our movie!”

With the announcement of Culion’s inclusion to this year’s MMFF, Team Culion’s mission to move past the stigma associated with Hansen’s Disease and the island of Culion in Palawan is slowly becoming a reality. The film hopes to raise awareness about the disease and debunk the old myth that it is highly contagious and incurable. Years ago, Mr. Peter Sing (who formed iOptions with his wife Gilie) learned about the story of Culion and he wanted to share its importance with the current generation who would hopefully pass it on to the next. One effective method that he could think of to share the story was to produce a film, and that’s what he did.

The project started two years ago and the aim was to have it compete at the Metro Manila Film Festival as they believe that it is the best way to deliver the film’s message because of the festival’s wide network and audience.

The support that the film has been getting from the public after it launched its first teaser trailer has been overwhelming, and many have already expressed their desire to watch the film. Even National Artist for Literature Bienvenido Lumbera, who is the head of the MMFF selection committee, has showered “Culion” with praise.

Producer Shandii Bacolod shared on Facebook a video of a very beaming and emotional Lumbera talking to Iza Calzado and praising “Culion.”

The stamp of approval, from no less than a National Artist, definitely speaks volume about the quality of the film and caliber of the people behind it. And the bar is certainly set very high with the best of the best working on the film — director Alvin Yapan, scriptwriter Ricky Lee, cinematographer Neil Daza and producer Shandii Bacolod.

Director Alvin Yapan himself could not contain his joy upon hearing Culion’s inclusion to the MMFF.

Meryll Soriano, who plays one of the female leads, was also beaming with pride for Culion and shared her pride at the accomplishment.

Although the journey took two years to complete, “Culion” the movie, now an official MMFF contender, is finally ready to fulfill its duty.

We had so much fun!

Once again Team Culion gathered but this time to celebrate our victory in finally telling the story of Culion – its people and its history. Each one entered with excitement and a smile in the ballroom at Marco Polo in Ortigas in Pasig City.

Executive producers Peter and Gilie Sing together with producer Shandii Bacolod expressed their gratitude to each and one who support and contribute to the making of the historical film.

Director Alvin Yapan joined the party, greeting everyone with so much joy in his heart.

Las tres marias – Iza Calzado, Meryll Soriano, and Jasmine Curtis-Smith – did not miss the gathering to meet the cast and crew. Present as well at the thanksgiving party were Joem Bascon and Mike Liwag.

The venue heard the loud laugh during the games aside from the chat exchanged with each other.

The overflowing food and drinks added to the energy and good vibes until the party ended at past 1 o’clock in the morning.

After the fun, the work must go on as Team Culion needs to prepare for the Metro Manila Film Festival 2019!

All are excited and nervous at the same time but most of all thankful that the movie will be shown on December 25 this year, joining the other seven movies that will bring high quality films to the Filipinos this Christmas Day.