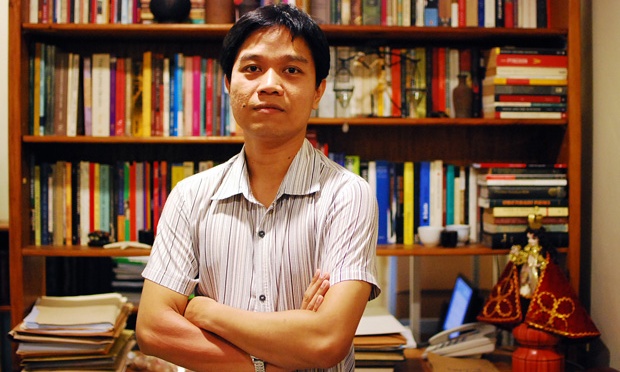 “Cut! Good take,” Direk Alvin Yapan’s voice rang out througout the set of the upcoming historical film “Culion” and a huge cheer erupted from the crowd at past 12 midnight.

That was the last scene to be shot and everyone was giddy. Finally, Yapan together with the production team was able to wrap up another filming.

Hails from the beautiful region of Bicol, Alvin Yapan is a film director, screenwriter, fictionist and professor. Most of his stories have been recognized by the Don Carlos Palanca Memorial Awards for literature in 1997, 2002 and 2003. He also won the NCCA Writer’s Prize in 2005, while his first novel titled “Ang Sandali ng mga Mata” won the 2006 National Book Award for Best Novel.

As a filmmaker, Yapan’s works have also earned him awards and recognition. His first solo feature-length film, “Ang Panggagahasa kay Fe” (The Rupture of Fe) was included in the Cinemalaya Philippine Independent Film Festival and won Best Picture for Digital Feature Category at the 33rd Cairo International Film Festival in 2009. His other film “Ang Sayaw ng Dalawang Kaliwang Paa” (The Dance of Two Left Feet) won the Bronze Award at the 28th Festival de Cine de Bogota in 2011 and Best Picture at the Gawad Urian in 2012.

He currently teaches subjects under Humanities at the Ateneo De Manila University, while still maintining his love for filmmaking. Just this July he completed his latest film, “Culion” to meet the deadline for the screening of entries for the upcoming Metro Manila Film Festival (MMFF) 2019.

In an industry where the widely spoken language is aggressiveness, it is refreshing to see someone who speaks calmness with clarity. And the fact that the director is the one who is under a lot of pressure during filming makes it even more admirable.

Alvin Yapan might be one, if not the calmest film directors out there. Despite all the drawbacks that are thrown his way, he can still maintain an undisturbed bearing. His calm demeanor was a huge factor in successfully completing the filming for “Culion” despite the many times in which the entire crew had to hit a snag because of the unforgiving weather and other unpleasant obstacles.

On giving acting directions, the calm director delivers it with remarkable patience and precision. Anger is rarely registered on his face, let alone in his voice. He deals with everyone, from the stars down to the crew with utmost respect. As a director, he makes it a priority to guide the actors in preparing themselves for their respective roles. He practically brings out the best in everyone.

On being the director of the film “Culion”, Yapan admitted feeling amazed and honored because of the film’s historical significance.

At the same time, he also talked about the pressure he felt while filming for “Culion” because they needed to finish all the scenes in 12 days only which proved to be challenging due to the typhoon Falcon, power outages, and many others.

Another thing that made this film a challenging endeavor for the acclaimed director is the fact that this was his first time to direct a film that he didn’t write. The script was written by the award-winning writer, Ricky Lee, made this project more promising.

Yapan said that he seems to be attracted to projects that are geared toward difficult yet deeply meaningful topics, like his controversial film “Oro”.

It can be remembered that Yapan along with producer Shandii Bacolod faced complaints filed against them by PAWS for violating animal rights when a dog was slaughtered during the filming of the movie “Oro”. The team was even invited to the Senate for the investigation of the case. In the end, Yapan and the team apologized for the pain that was brought by the incident, while maintaining that he didn’t order the killing of the dog, nor did any member of the production team participate in the killing. The dog was slaughtered for a wake, and the team merely used it as a material for the film. Yapan exhibited calmness amidst the controversy and took his share of the responsibility.

“… controversial naman in a good way, in a sense that we’re tackling topics that are really difficult. At kaya minsan because they are difficult topics, mapapaso at mapapaso talaga at responsibilidad naman namin ‘yun bilang filmmakers”, Yapan said in an interview.

Aside from taking full responsiblity of the actions committed for the production of the film, Yapan also proves that he is an admirable captain of the ship; the kind that is worthy of everyone’s respect when he doesn’t greedily take all the credits for himself.

That alone speaks volume about his credibility as both an artist and a team leader.